This is the Global Economic, Commodities, Scrap Metal and Recycling Report, by our BENLEE Roll off Trailer and Lugger Truck, July 6th, 2020. 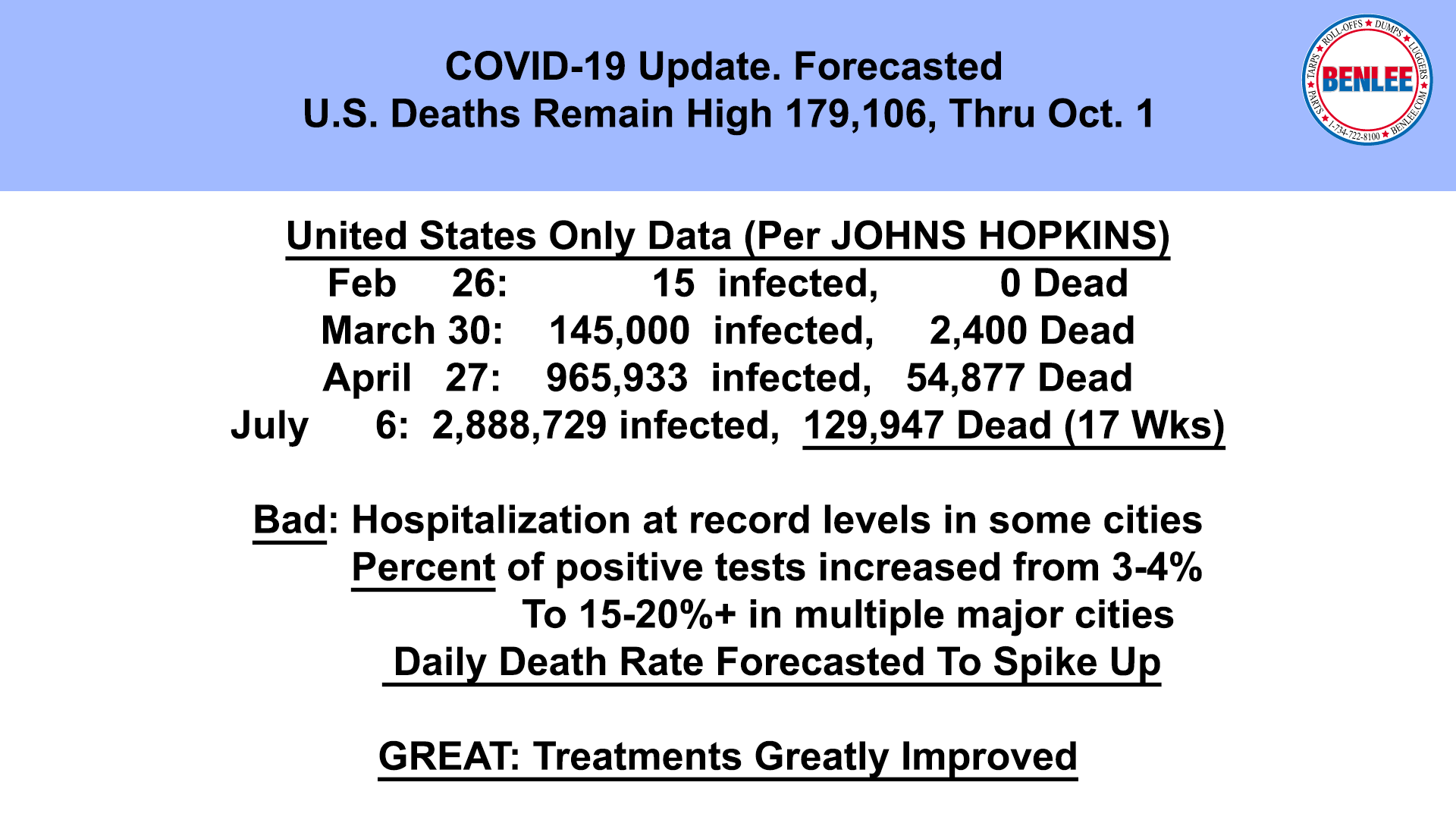 Covid-19 Update. Forecasted U.S. deaths remain high at 179,106 through Oct 1st with a mind numbing 129,947 dead in 17 wks. Bad news is hospitalizations are at record levels in some cities and the percent of positive tests have increased from 3-4% to 15-20% plus in multiple major cities, with the daily death rate forecasted to spike up. The great news is, treatments have greatly improved.

U.S. weekly steel production was steady at 1.24M Tons, as the U.S. is partially reopening, but as some areas are closing again.

Oil price rose to $40.32/barrel near a multi month high as there is a demand increase combined with massive global production cuts.

U.S. oil production was steady at 11.0M/b/d, as low prices and the U.S. government commitment to OPEC and Russia to lower U.S. production, is holding.

Iron ore fell to $101.50/ton and remains fairly high as China’s economy is back in a growth mode.

Scrap steel #1 HMS composite price was steady at $210/GT as there is slight downward pressure on prices.

Hot Roll Coil steel fell to $23.85 per hundred on a small demand increase, but more supply in the market. 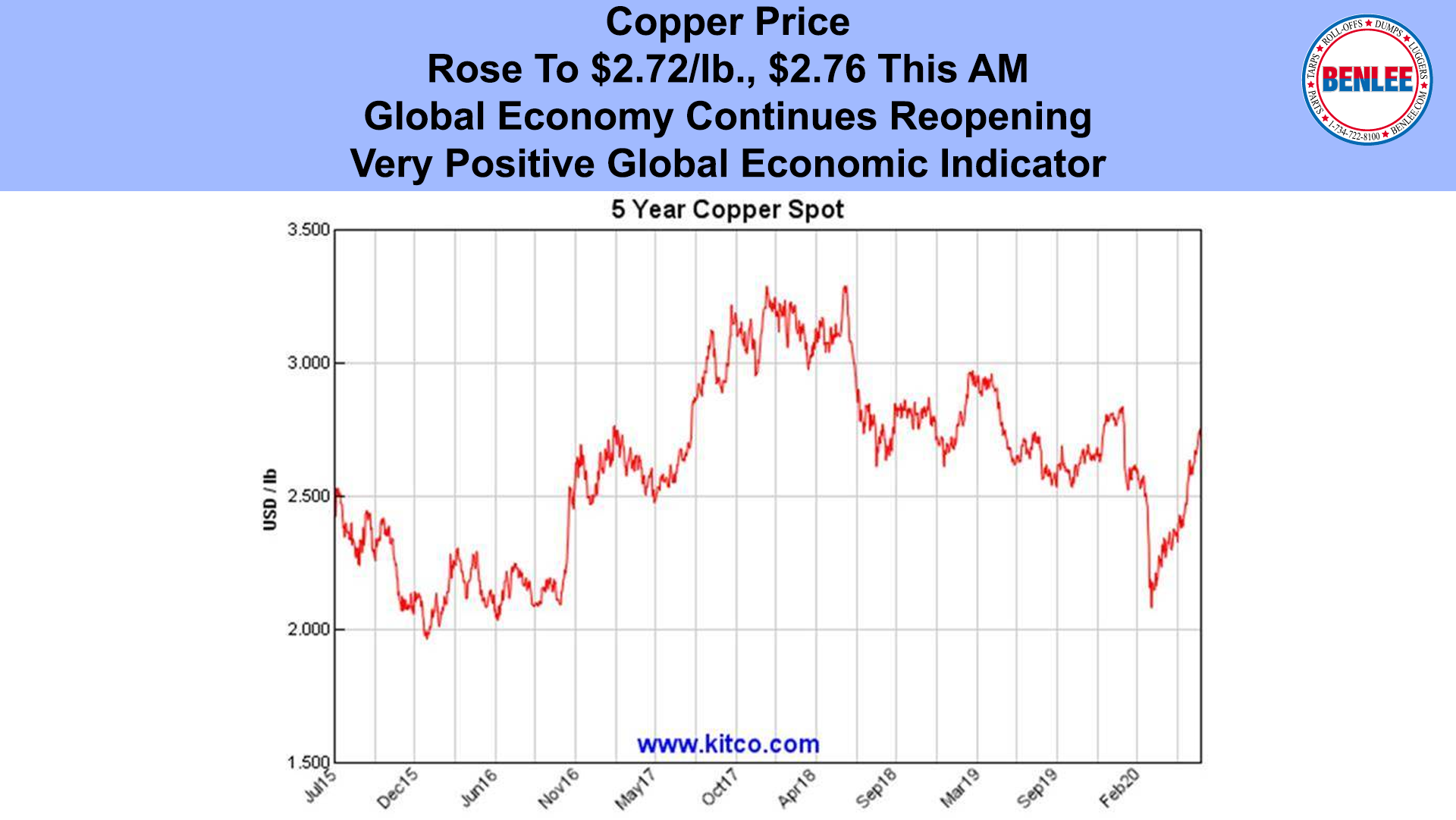 Copper rose to $2.72 per pound a multi month high and is $2.76 this morning as the global economy continues to reopen. Higher copper prices are a very positive global economic indicator. 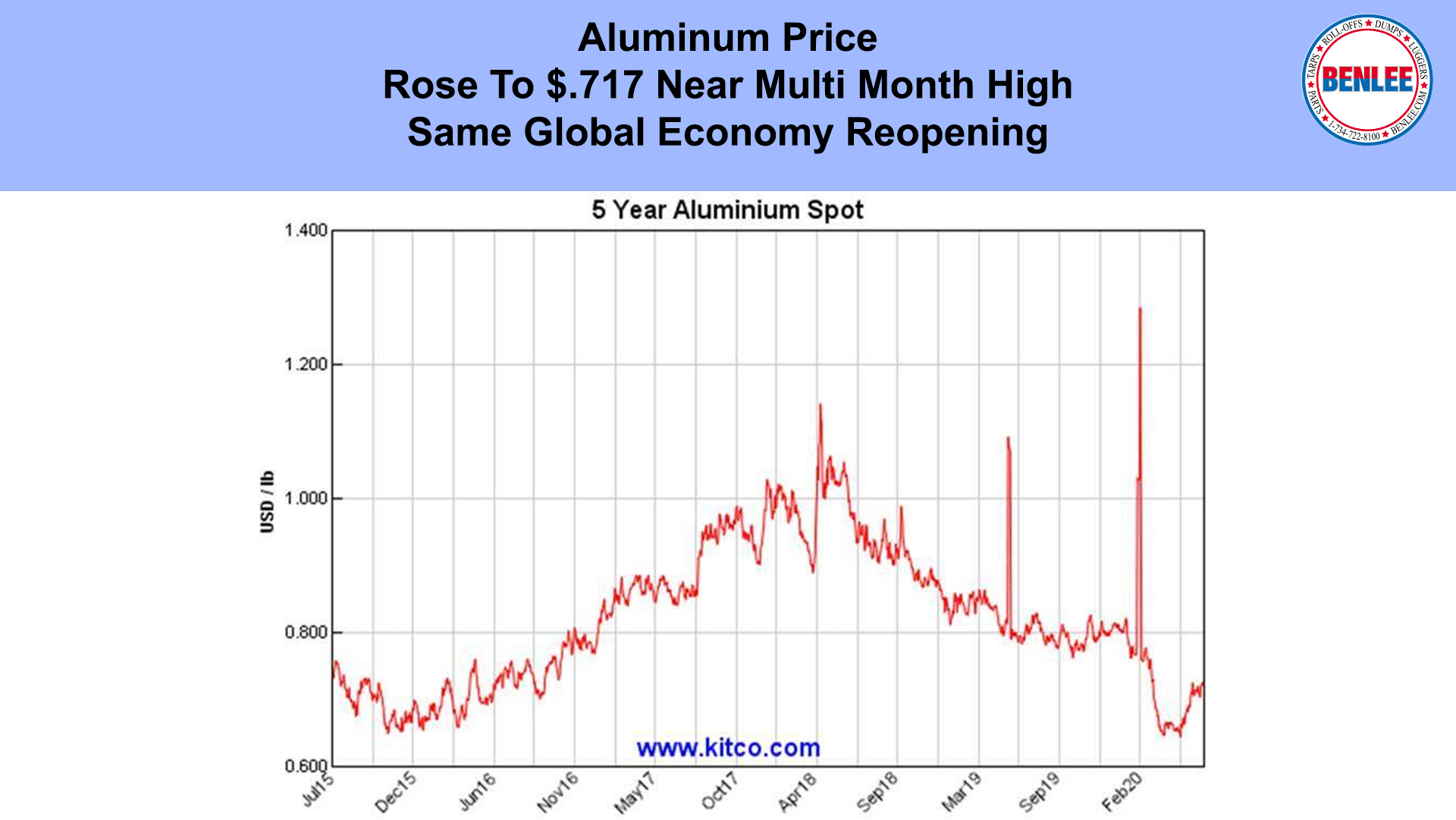 Aluminum rose to 71.7 cents near the multi month high on the same global economy reopening.

China’s Caxin Manufacturing index for June rose to 51.2, the highest since December as output and new orders grew for increased China demand, but export orders fell on weak global demand.

U.S. New jobs pre-February had a 10+ year steady growth trend, then crashed. June’s jobs jumped a record 4.8M, a great number, but we have a long way to go.

The U.S. unemployment rate, see this 75-year history chart, fell to 11.1% in June, which is great news, but the number of unemployed remain 7.6% and 12 million people higher than February.

U.S. ISM Manufacturing Index. Note the tax cut peak in mid-2018, not the forecasted growth trend, as the tax cut sadly became just a one-time sugar high on the economy, vs a forecasted beginning of a new growth trend. The good news is, in June it rose to a solid 52.6 with solid new orders.

Wall Street’s Dow Jones Average rose 811 points to 25,827 as governments around the world borrow and pump trillions of dollars, euros and more, into the economy. As they say, “Don’t Fight the Fed”.