This is the Global Economic, Commodities, Scrap Metal and Recycling Report, by BENLEE Roll off Trailers and Open Top Scrap Gondola trailers, April 20th, 2020. This is a remote edition. 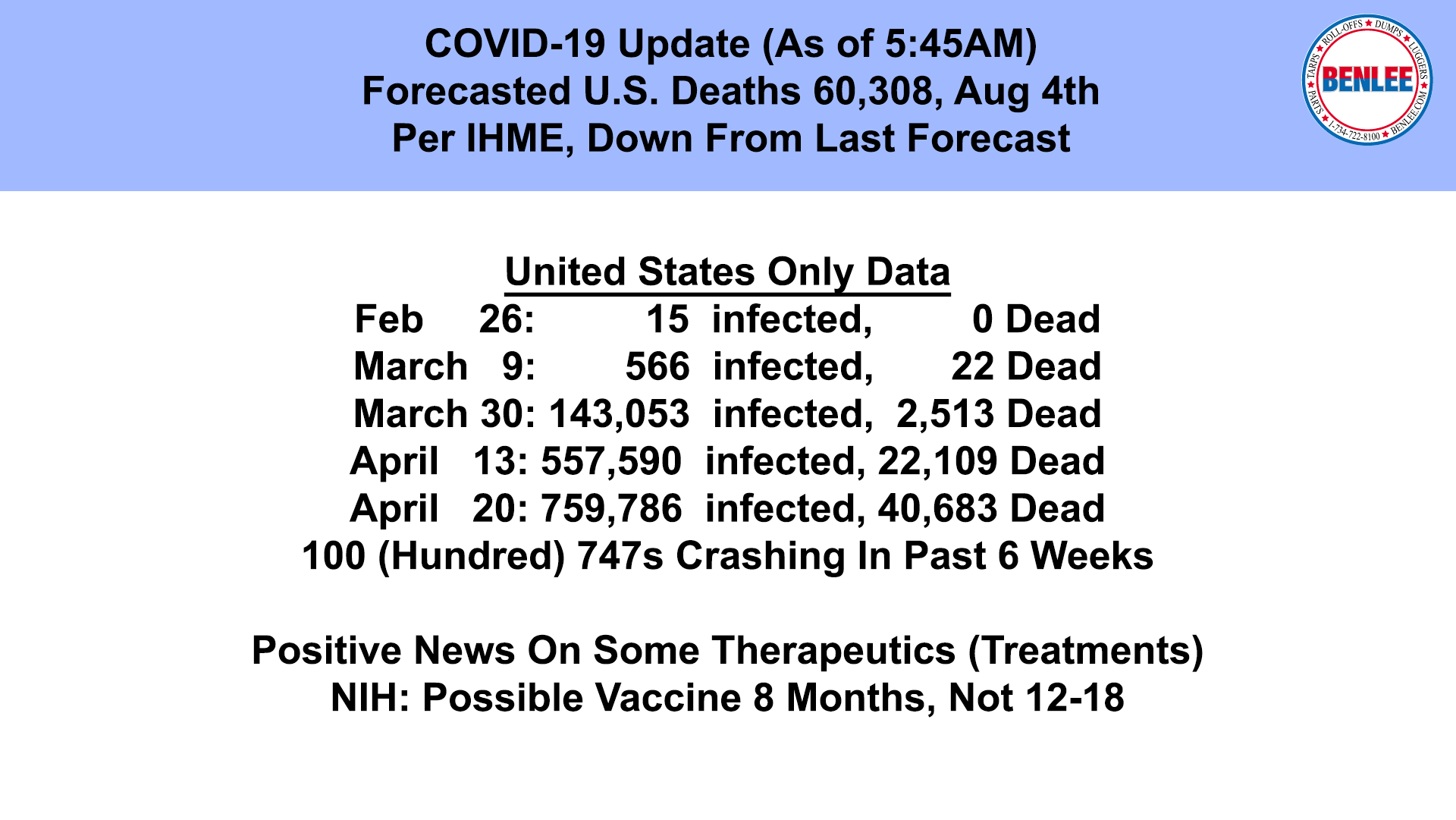 U.S. weekly steel production fell to 1.256 M Tons, an about 10 year low as automotive and other manufacturing remain closed.

Oil prices fell to $18.27/b, an 18 Plus year low, and hit $14.06 this morning, due to global demand destruction, due to COVID shut downs and recent high OPEC+ pumping, to get prices low, to hurt U.S. drillers. The recent OPEC+ agreement including the U.S., to cut oil production and the opening of China, parts of the U.S. and other countries, could raise prices.

The U.S. Oil rig count, which was the past yardstick for oil, a key measure of the industry, fell to 437, a multi-year low. People forget that 2009-2015 were the best years by far in the oil rig industry. Shale oil that costs less to extract than many oil rigs was booming, but now low prices are hurting shale.

Scrap steel #1 HMS price settled to about $186/GT, on falling demand and supply. 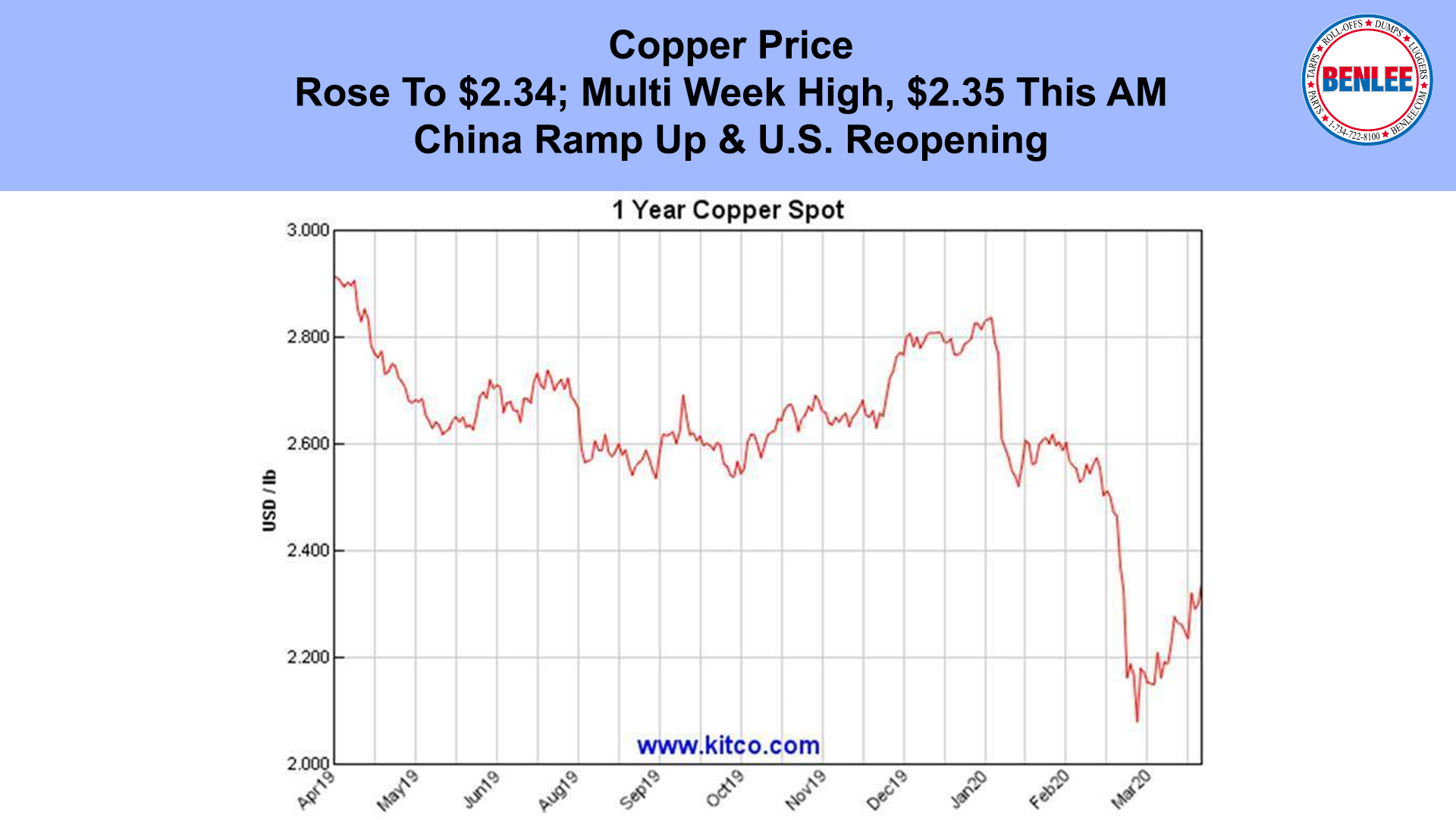 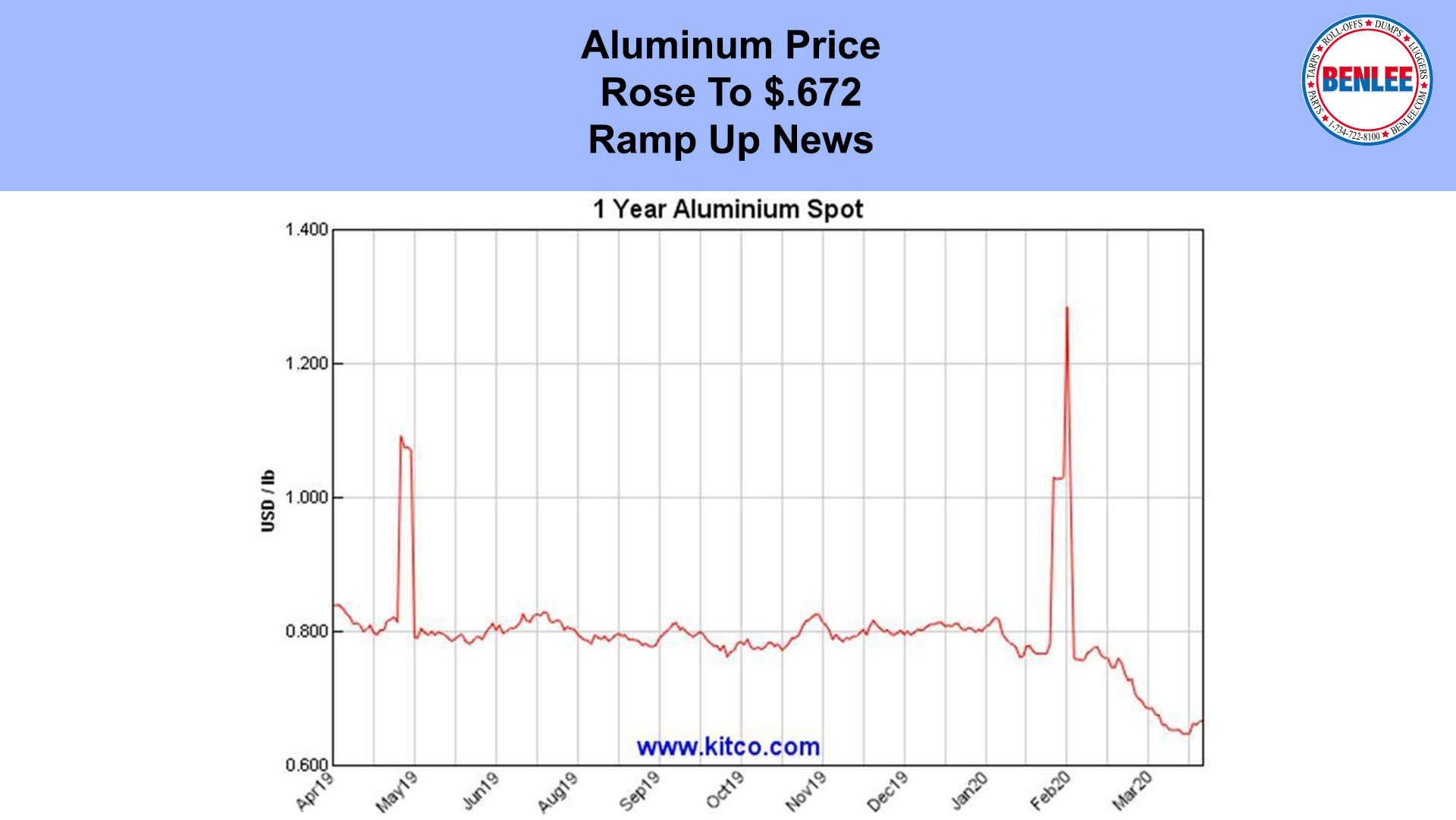 Aluminum rose to 67.2 cents per pound, on the same ramp up news as copper.

March’s U.S. Total Industrial production slumped 5.4% from February, the largest drop since 1946. Manufacturing fell 6.3% led by a 28% tumble in vehicles and parts.

March’s U.S. retail sales plunged 8.7%, vs February, the largest decline on record, meaning the COVID crash could be harder than anticipated.

March’s U.S. Housing starts plunged 22.3% to 1.216M, the largest decline since 1984, but April will show much worse data. A very negative economic indicator.

U.S. Weekly unemployment claims fell to 5.245M, and have now been a staggering 22 million in 4 weeks, a historic rate of job loss in American history.

Goldman Sachs one on the major global banks is reporting the Economic hit to the U.S. will be far worse than the 2008-2009 financial crisis and unemployment could hit 15%, vs 10% in 2009, but the recovery in the 2nd half could be the strongest in history.

Wall Street’s Dow Jones rose 523 points to 24,242 as virus deaths hit new daily highs and as reopening the economy is getting closer. The U.S. Government is borrowing trillions of dollars to prop up the economy that has been in free fall.