This is the Global Economic, Commodities, Scrap Metal and Recycling Report, by BENLEE Roll off Trailers and Lugger Trucks, December 16th, 2019.

U.S. steel production fell to 1.821 Million tons. We could be near a low as the U.S. China Phase 1 trade deal which was announced on Friday, is a positive for the global economy.

Oil rose to $59.88 a barrel, a Multi-month high, on continued OPEC production cuts and the positive U.S. China trade news.

U.S. weekly oil production fell slightly to 12.8M barrels per day, near the record level, as oil companies remain positive, but under financial pressure due to the somewhat low prices.

Iron ore rose to $93Ton, on hopes of global growth accelerating, especially in China, which manufacturers about 50% of the world’s steel.

Scrap steel #1 HMS was up to $229.33 on the tight supply due to the very low October and November prices. January could see higher prices. 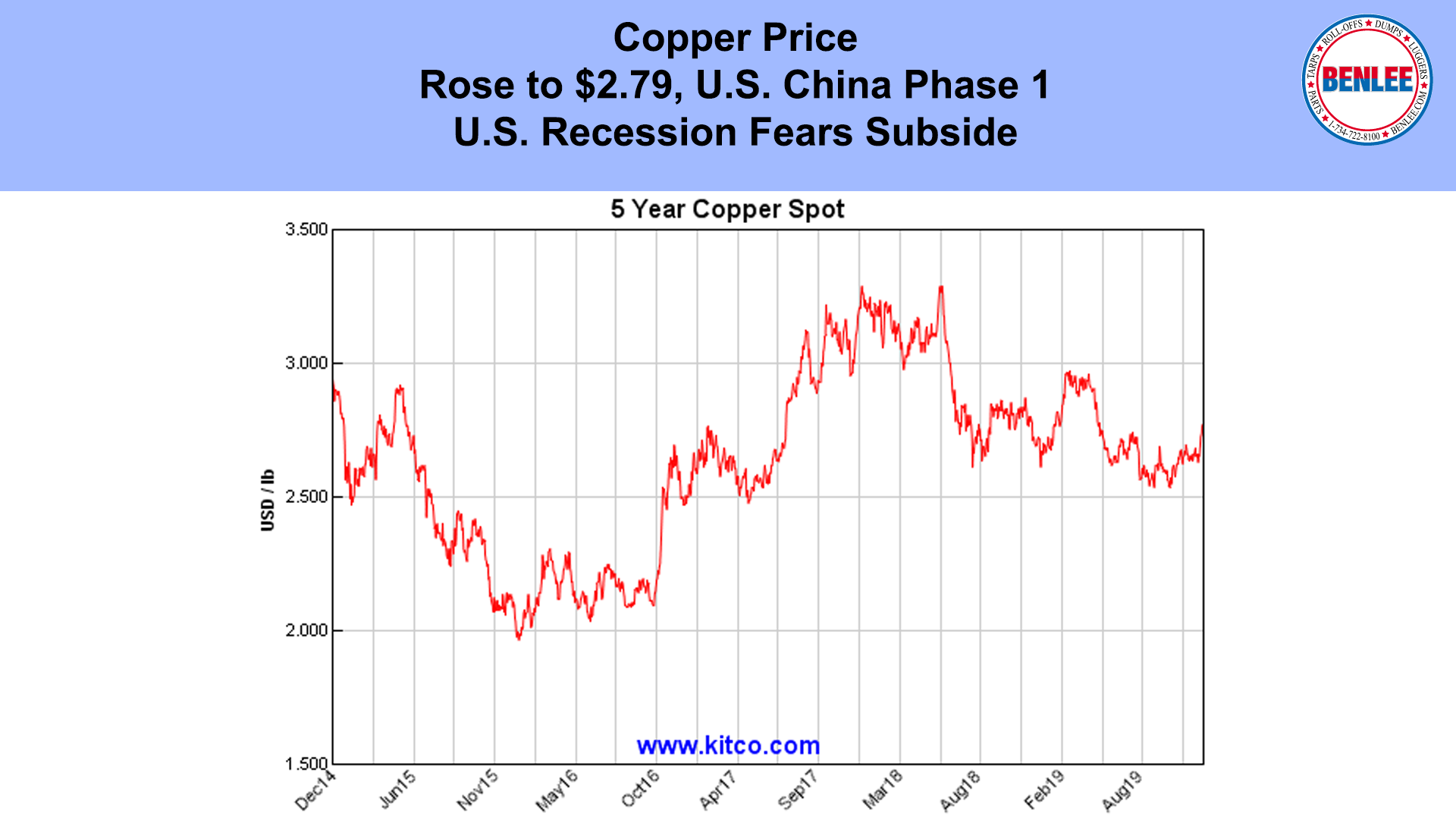 Copper rose to $2.79 per pound, on the announcement of the U.S. China phase one trade deal and as U.S. recession fears continue to subside. 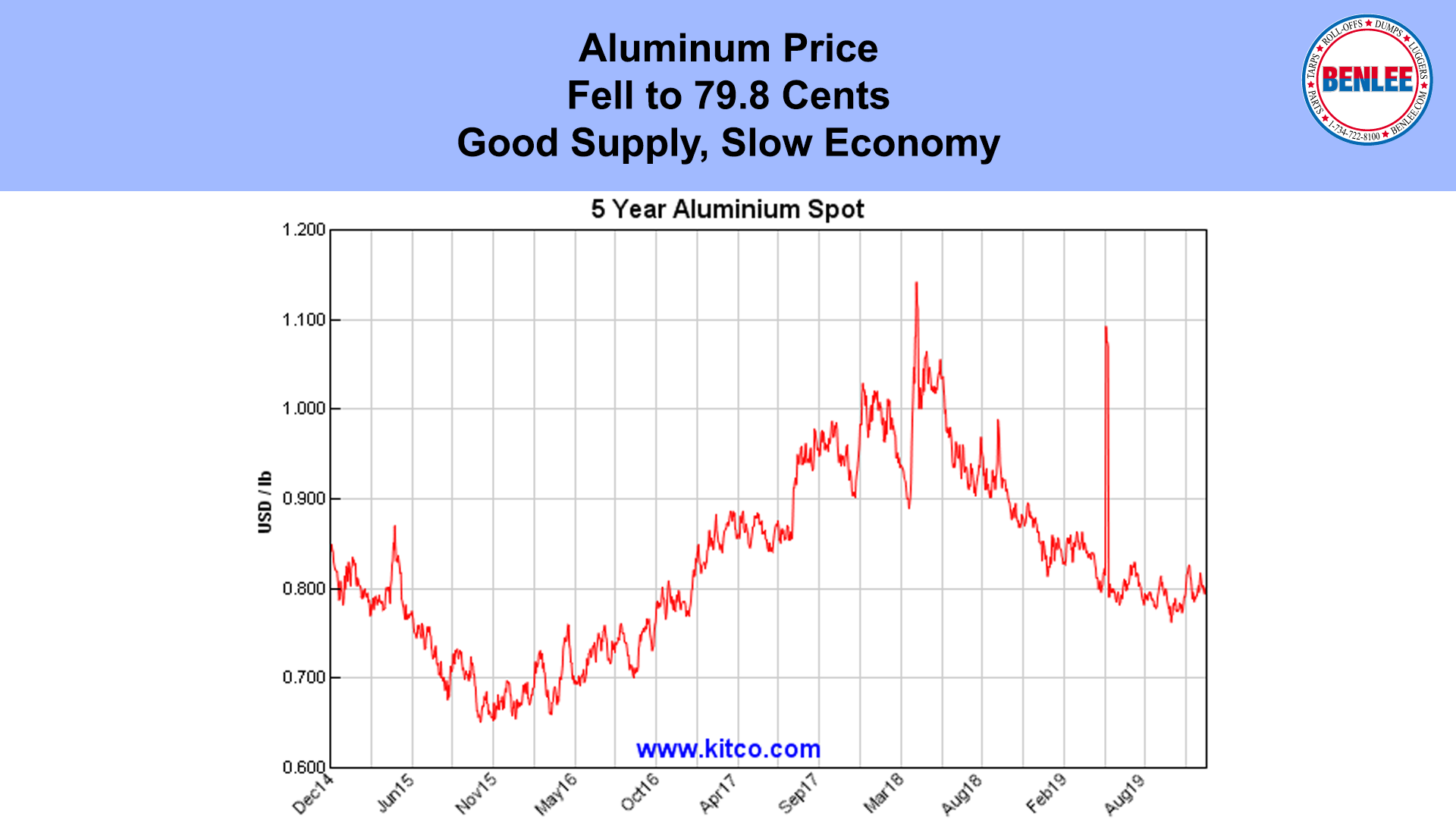 Aluminum was fell to 79.8 cents per pound, as aluminum remains in good supply in a slow economy. 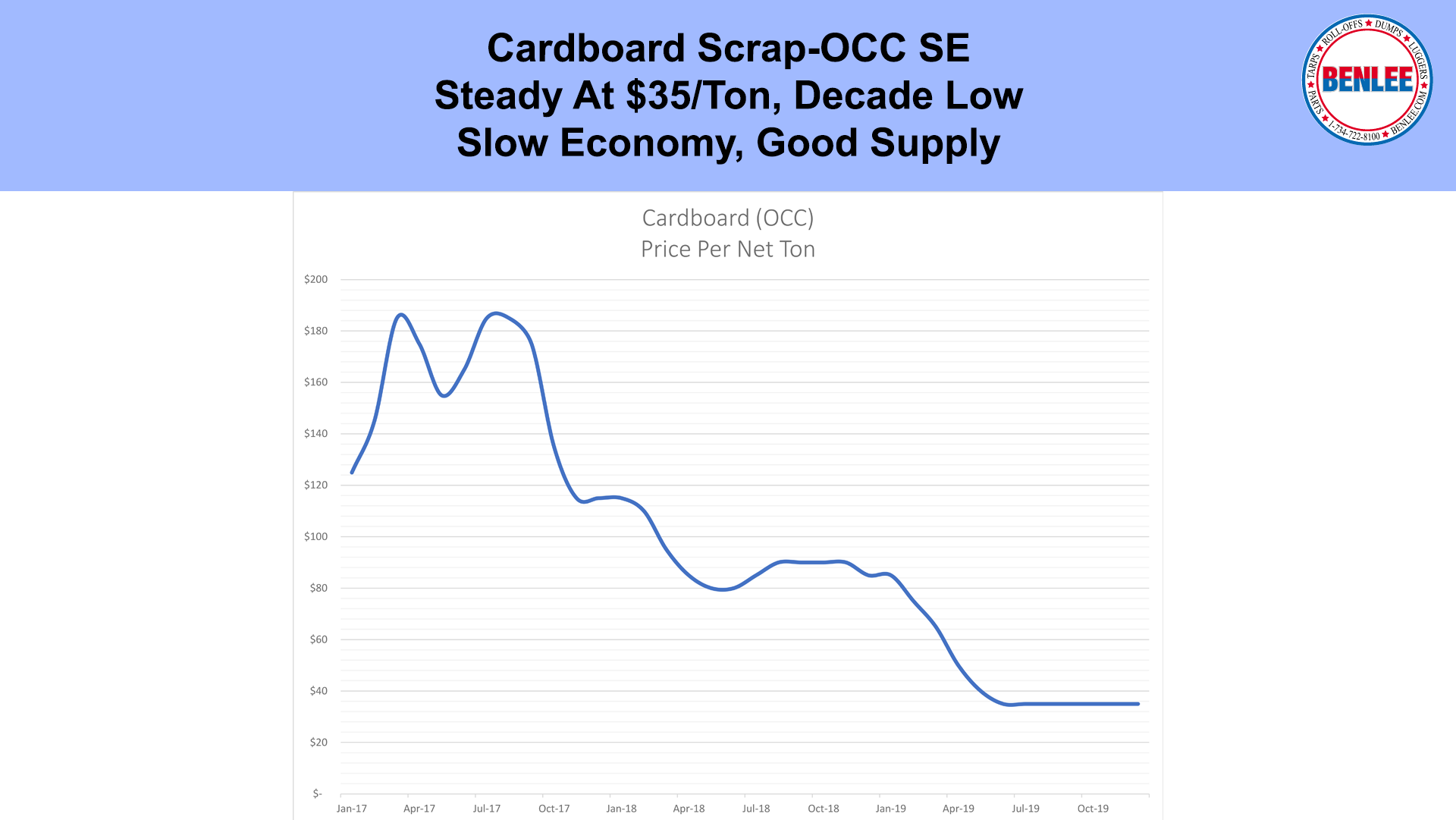 China’s November Vehicles Sales, were up vs October, but down 3.6% vs. last November, making it the 17th consecutive month of decline, year over year. Tighter emission standards are hurting sales as older vehicles are going unsold and the trade war hurts the economy.

As a positive, China’s November Industrial production rose 6.2%. While down from the highs in recent years, it is still a solid number which should increase now that the trade war has somewhat been put on hold.

Japan, which has the third largest global economy after the U.S. and China, had their October Industrial production fall 7.7% vs. last year, with the U.S. China trade war being one of the key reasons.

U.S. Retail sales in November rose .2%. Sales of gasoline and vehicles slowed, as did spending on clothing and restaurants. Consumers remain key to the economy as industrial production contracts.

U.S. Unemployment claims jumped to 252,000, the highest in over two years as manufacturing continues in a contraction mode in much of the U.S.

U.S. Inflation in November rose to a one year high of 2.1% the highest rate in a year. Core inflation, which excludes the volatile food and energy prices was unchanged at 2.3%, which is above the Fed target rate of 2.0%

Wall Street’s Dow Jones Average rose to 28,135 hitting a new record during the week on the positive U.S. China trade news, continued slow growth and as said earlier, recession fears fading. This continues an outstanding 10-year run, creating huge wealth for those in the stock market.